When I was old enough to understand basic commands, my father trained me to perform a Mexican hat dance on cue. Another bizarre trick had me headbanging when he said “DONG!” This continued until I was around age three or four; I discovered humiliation and refused to put on any more shows for the video camera or family friends.

It was then that I, their little Korean refugee, was no longer considered “fun.” 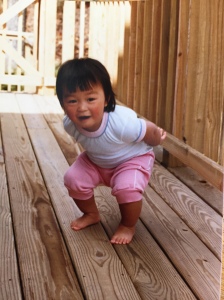 Position assumed, followed by tap-dancing around an imaginary sombrero. #unfortunateimplications

Halloween was their chance to shine. Like a doll, mom forced me into a gifted Chinese dress (I’m Korean), caked on white facepaint, and squeezed my chubby toddler feet into pointy rubber Chinese shoes. The following year, I wore a hanbok; instead of a trick-or-treat bag, I carried a pillow with a South Korean flag pinned to it.

As I struggled toward adulthood, I remained their perpetual Korean orphan, an amusing participant for their parlor games. Through growth and distance, I bastardized their original presumption that Koreans were “quiet, trouble-free, responsible and achieving people”; in fact, I was regularly reminded that if I were still in my home country, I wouldn’t make it because I’m too loud, too demanding, too me.

The adoptee is caught between, spoken for, treated as a purpose, or a context, as a way to improve the adoptive parent or agency, as something to be learned from or ignored, as less an individual with her own agency and more a contribution to the agency of someone else. –Matthew Salesses

In the above quote, Salesses pointedly offers a nuanced view of an adoptee’s self-defined purpose. I agree with him, and would argue that it’s partially because the “general public still broadly understands Korean and other Asian adoptees as child foundlings who are lucky to have the opportunity to become American.” When transracial adoptees grow up, we no longer wish to be marionettes for families built on misconceptions, even though some of those illusions were enforced by our placing agencies. In fact, many adult Korean adoptees “describe a diminishing relationship to family during and after the expansion of their Korean adoptee identities.” It’s no surprise they’re staging a quiet rebellion.

I discuss this subject in my book, looking at how innocent-seeming heritage appreciation and assimilation attempts by White parents can quickly transform into racial microaggressions, or in other cases, outright aggression. South Korea’s recent apologies to adoptees haven’t helped; instead, they remind the public that we’re “pathetic and pitiable orphan[s] and…lucky transnational émigré.”

Though all this leads to tangled identity crises that I hope to unscramble, I don’t believe it was totally malicious. My parents did the best they could, espousing the then-celebrated and now-derided 1980’s colorblind theory, a societal failing that I’m working on dissembling. I seek to portray them – and other well-meaning White adoptive parents – as victims of misaimed marketing, cultural norms, and – in my parents’ cases – insular upbringings.