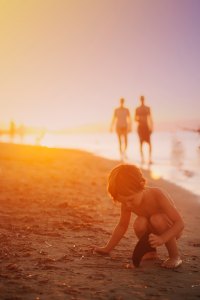 I’m ashamed, I am. It was an unusually difficult day, with him home from school sick with the sort of illness that spontaneously resolves an hour after drop-off. I’d hopefully began my day, intending to write and do the other invisible things mothers do while children are busy growing.

By evening and before my writing workshop, I’d had it with L’s* “failure to listen.” He, along with the dog, ran sprints around my first floor, screaming and barking in a way that made it difficult to determine which noise was coming from what temporary monstrosity. My husband was almost home and I was putting on my coat so I could escape.

L lunged down the narrow hallway, screaming a preschooler’s typical gibberish. I screamroared

Mommy’s leaving you because you never listen.

The air in the house, previously made of shaking atoms and vibrating sound waves, became a paralytic poison.

L’s face held none of the smiling glee from the seconds before I swiped at his confidence. He looked at me with a primal vulnerability. He considered my threat and said

You can’t leave. We family.

And in that moment I realized exactly what I said and what adoption trauma did to me. It transformed mothering into an option, a threat, a weapon. A powerful tool to wield at misbehaving children because I believed myself unwanted. A five-second declaration laid bare my fractured attitude toward family.

I share this shameful moment as proof of a child’s awareness of a mother’s presence. And that a threat to leave—not just to leave to run errands but to leave, forever—is understood in a child’s abstract way. My voice, a tool used for sharing my own adoption trauma, issued forth the same threat adoptees received from their relinquishments.

I hope readers struggling to accept the reality of adoption trauma read my words and finally believe. Believe babies and children are equipped with survival instincts so heightened that those intuitions remain at the forefront of their innocent defense; and, believe, for once, this trauma manifests itself throughout an adoptee’s lifetime.

I am not proud of my behavior. I am working conscientiously to correct my words and understand my actions. I have since apologized to my sweet son, but I want my example to ring forth as a warning:

*Name abbreviated to protect the (literal) innocent. And to prevent him from, years from now, yelling “MOOOMMM!” when he finds my writings.

5 thoughts on ““we family”: a message on adoption trauma, from my son”