Part One introduced adoptees as perpetual children and their status as invisible minorites. Part Two focuses on adoption insults and the American family.

We might wonder how we arrived here, with so many adoptees divided on the subject of their birth and subsequent adoptions. We’ve established that inevitable myths and maybes are associated with adoptions of all kinds (intercountry, transracial, domestic, etc.), creating chasms among diverse sets of adoptees, but what else created society’s invisible minority?

Two ongoing external factors keep adoptees in a childlike stasis: One, the continued abuse of the phrase “You’re adopted!” and two, misconceptions of the traditional American family.

Let’s go back in time by briefly recapping American family history, starting with the 1950s—the time when adoption (especially intercountry/transracial adoption) became more common. Then we’ll look at the media’s use of adoption as an insult and tie the themes together to understand adoptees’ current condition.

Remember, this article only briefly summarizes a deeper conversation—my work-in-progress dives further into the literature and its greater impact on adoption. For simplicity’s sake, I’m focusing on the period between 1950 and 1980.

Be sure to follow me for more sneak peeks!

Leaving “Leave it to Beaver” Behind

Children of the 1980s watched reruns of “Happy Days,” “Leave it to Beaver,” and “The Donna Reed Show,” often alongside parents for whom these programs elicited nostalgia for the good old days. Dads knew best, making fathers all-knowing beings who created and supported progeny with guaranteed good futures. Moms were usually smiling dress-wearing chefs.

Younger generations criticize these whitewashed shows, mocking the racially and gender-role limited representation of the all-American household. But popular culture is a pervasive creature, weaving its way into fading memories and creating reality out of potentially unhappy fictions. What we end up with is a pervasive idea that families must match and anything else—especially a white family with a non-white addition—symbolizes failure or distrust.

Adoptive parents raised in the 1950s absorbed a culture that newly encouraged “men as well as women…to root their identity and self-image in familial and parental roles.” What with Cold Wars and World Wars, an emerging middle-class of white Americans were ready to embrace their latest post-War economic gains and make the nuclear family “the most salient symbol and immediate beneficiary of their newfound prosperity.”

These financial freedoms weren’t available to non-Whites, but that’s no matter: The rising racial divides and battles for equal minority representation were mostly hidden from families nestled in homes behind white-picket fences and cul-de-sacs. As a result, the ideal family was neighborly, homogenous, and conformist.

Today, it’s easy to see the consequences of such self-imposed sheltering, but how did it impact adoption? 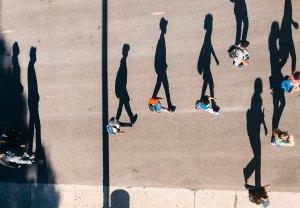 At the same time monoracial middle-class family units prospered, Korean adoptees—brought to the United States beginning in the 1940s and continuing en masse through the 1980s—matured alongside this budding American dream. Their existence, along with black adoptees (adopted less frequently than Koreans), was set against a backdrop of sameness. But transracial adoptees represented to liberals a social progression; proponents for racial equality could point to transracial adoption and proclaim that we’ve achieved success.

But for others, adoption may have been a blight on American achievements. Since non-white persons still retained “other” status, their unmistakable presence among their adoptive families may have led outsiders to question the stability of the so-called traditional American family.

And, despite the 1960s and 1970s notable progressiveness, adoptees whose appearance differed from their families remained polarizing symbols: either progressives were doing something right or they took equality too far. For adoptees who matched, their existences became a sometimes shameful secret—what damage could an unwanted child bring to a family?

With the nuclear family tantamount to success, adoptees symbolized failure: Someone failed to care for these “orphans,” someone failed to take advantage of the economic prosperity available to middle-class Americans, someone failed to adhere to the country’s still-pervasive Christian values.

It’s then that adoption became an insult since adoptees represented an affront to “proper” society. On one hand, optimistic people viewed it as another American achievement; we can afford to take care of others as well as ourselves. But ultimately, less-informed or more traditional folk may have viewed it as a serious decline of moral values.

In the 1980s, Ronald Reagan declared

[T]he family has somehow become less important. Well, I can’t help thinking just the opposite: that when so much around us is whispering the little lie that we should live only for the moment and for ourselves, it’s more important than ever for our families to affirm an older and more lasting set of values.

In Reagan’s conclusion, he wistfully noted that “there is a certain quietness, a certain calm: the calm of one still night long ago and of a family—father, mother, and newborn child,” leaving very little room for adoptees and plenty of space for stubborn adherence to so-called societal norms.

Unfortunately, Hollywood love(s) this trope, prominently featuring it in 1990’s Problem Child, where even considering adopting a troubled child creates a black mark in an entire neighborhood. (Not to mention the “He’s not even a real kid. He’s adopted!” quip.) The implication seems to be that orphans are dangerous cat-throwing pyromaniacs who worship prisoners in the guise of Michael Richards. And the overarching sentiment lies solely with his poor, well-meaning parents–Junior’s issues are only barely acknowledged.

This movie—and countless other media representations—made adoption a punch line, a stigmatizing condition that’s either all good or all bad. And despite the rise of charities supporting children’s needs, it was best to philanthropize at a distance; inviting stranger children into our homes overstepped boundaries, highlighting unsolvable societal problems.

Maybe my definition of adoptees as invisible minorities needs a revision. Adoptees may be more accurately described as “society’s shameful open secret,” especially when leaders declare that “in recent decades the American family has come under virtual attack.” Donald Trump’s recent State of the Union address also perpetuated adoption misconceptions, firmly entrenching adoptees in a state of inertia.

Part Three will conclude this series, wrapping up with discussion of adoptees’ current efforts to undo these misconceptions. I’ll disuss the challenges they face, as well as what else must be done if adoptees are to change adoption’s public perception.

In the meantime, I recommend reading The Way We Never Were: American Families and the Nostalgia Trap, by Stephanie Coontz. She breaks apart the so-called traditional family myth and shows that no such thing really existed.

Thanks so much for reading and remember: Share this article so non-adoptees can be drawn into our cause.

3 thoughts on “Society’s Perpetual Children: An Introduction to the Adoptee Condition (Part Two)”